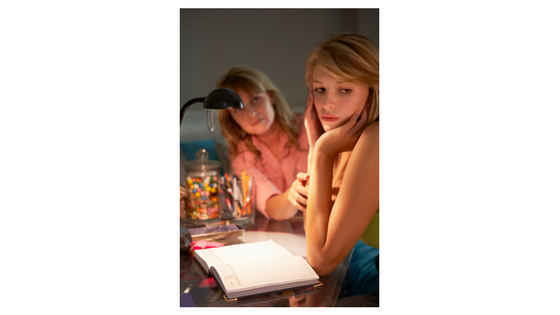 I would like to introduce Renee Fabian a Los Angeles based writer and editor, who wrote an article discussing a topic that is dear to my heart – How Parents Can Support a Child who Self-Injures.  In the article, Renee shares her experience of engaging in non-suicidal, self-injurious behavior (NSIB) that began during her teen years and what led to self-injury.

Renee interviewed Janis Whitlock, the director of Cornell University’s Research Program on Self-Injury and Recovery and, yours truly – Vena Davis.  Check out the helpful information that Janis and I offer to parents who are raising a child that engages in self-injurious behaviors.

My mom remembers the day she found out I was self-injuring — June 4, 2004 — right down to the yellow tank top I was wearing.

I had started cutting and burning myself months earlier because I didn’t know how else to manage extreme distress caused by a sexually abusive relationship with a teacher.  I was 17, and I used self-harm to shut down negative feelings and relieve stress.

My parents didn’t know any of this at the time.  Once they found out about the self-harming, they did what seemed logical to them: Hid all the knives and paid closer attention when my door was closed.  They repeatedly tried to have conversations with me, and tried to find me a therapist.  Despite their best efforts, though, my behavior persisted.

Without specific information about how to handle a self-injuring child, my parents struggled.  It took years, but thanks to their persistence and open ears, along with therapeutic support, I am self-injury free.  Here are some suggestions on how to help your child.

Take a step back

Discovering that your child is self-injuring will bring up feelings from helplessness to guilt, grief and even anger.  My parents wanted to do something right away, to make everything better and get me to stop.  Unfortunately, it’s not that simple.  Recovery is a process, and it starts with parents approaching their child from a calm place.

“Parents have to take a moment to process things, as well as the child, who may fear that they’re in trouble,” says Vena Davis, a Las Vegas-based therapist.

“Your child is not trying to end their life,” says Janis Whitlock, director of Cornell University’s Research Program on Self-Injury and Recovery.  “What they’re really trying to do is feel better.”

Self-injury looks scary to parents, but it’s simply an extreme attempt to cope with difficult emotions.  It calmed me down when I was overwhelmed, and gave me a feeling of control.  But when my parents panicked, my emotional instability got worse.  “The first step for a parent is to really figure out what they’re dealing with and get calm and centered before they have any kind of real conversation with their child,” Whitlock says.

Approach your child with curiosity

To open the conversation, Whitlock recommends asking respectfully curious questions such as, “Can you help me understand what’s happening for you?” Or, “How does cutting yourself or hurting yourself make you feel better?” This gives kids a chance to share honest answers.

“Many teenagers will probably be very scared that their parent found out,” Davis says.  “[Lead] with, ‘You’re not in trouble for this, and I know that you’re probably scared to have this conversation, and I’m really just curious to know how long have you been self-harming?  What’s going on?’”

As a teenager, I had a turbulent relationship with my parents.  I wouldn’t let them in, and out of panic and misunderstanding, they asked questions and expressed concern with thinly veiled fear and a sense of, “Why can’t you just stop this?” As a result, I felt more out of control and actually increased the behavior.  While it seems counter-intuitive, allowing children an appropriate amount of space will encourage them to open up.

This is a serious issue best supported by a qualified professional.  If your family doesn’t already see a psychologist, call a few clinicians to find one who works with self-injury and adolescents.

A therapist will help create an open environment for the child to learn ways to cope with negative emotions.  Young people need immediate alternatives for moments of crisis, as well as lifelong emotional regulation skills.  Therapists will also help them explore underlying issues, including trouble at school, mental illness or other stressors such as trauma and abuse.

Parents should consider seeking professional help for themselves as well.

“As much as it is important to not shame the child who is engaging in self-injurious behavior, it’s also important for the parent to practice being nonjudgmental and not shaming themselves as a parent,” Davis says.

My parents felt like there was nothing they could do other than try to find professional intervention.  But parents can play an active role in a child’s recovery by modeling healthy emotions.

At a developmentally appropriate level, this means letting children see when you are hurting or struggling.  Express emotions using words and show how you handle feelings, whether that’s taking time and space to cool down, or crying a little.  Children will soak up this information, even if it doesn’t stick right away.

“Kids watch adults like hawks,” Whitlock says.  “Demonstrate to a child vulnerability and fear and guilt, or whatever feelings the parent is authentically having.  That’s really important.  Because that’s often what they really don’t know how to do, kids who injure.  They have a really big emotional reaction and they have no idea what to do with it.  They need other strategies.”

Whitlock has also found that many people who self-injure are uncomfortable with positive emotions.  Help children find opportunities to let in pleasant experiences, by asking them to recognize when they have received a compliment or had a moment of joy.

Recovery is a process

Healing your child will take time and patience.  Recovery won’t happen overnight, but the good news is that time is often on parents’ side.

Adolescents who self-injure can recover, particularly if their parents stay calm and model healthy emotions while showing compassion and curiosity and seeking professional support.  While it may not seem like that’s enough to protect your kid, letting them know you are there for them will make a huge difference.  It did for me.

My father says that learning I was cutting myself was horrifying for him, leading him to try to tell me it was harmful and unnecessary.  “Nothing we did, other than being a loving presence in life, made any difference,” he told me.

If you or someone you know would benefit from receiving therapy, please call me at 702.980.5036 for a free fifteen minute consultation. I am happy to provide additional support and guidance.  Until next time …

Originally cited in the On Parenting section of The Washington Post

How to Hide Self Harm Scars